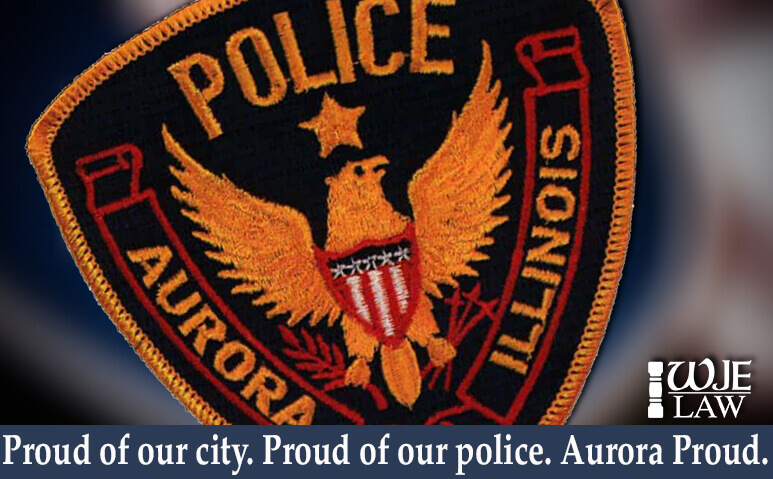 Our law firm has a special relationship both with the City of Aurora and the Police. When we founded our law firm, the city of Aurora, Illinois is where we planted our flag. From there our practice has grown tremendously, adding new locations and many more lawyers. However, it all began in the City of Aurora. Aurora was a working town propelled by manufacturing and boasting the largest population of any Illinois city not named Chicago. It is a diverse town. A town of good, hardworking people. A town that we felt we could serve well and be rewarded. We were right.

Police officers and their families have always occupied a special place in our hearts and in our practices. We have represented hundreds of police officers from across the State of Illinois who have been injured in the line of duty. We are recipients of the Blue and Gold award and a recommended law firm of the Illinois Federation of Police.

On Friday, February 15, 2019, both the City of Aurora and its courageous police officers were pushed to the front of the national stage when a lone gunman opened fire with a handgun at his employer’s manufacturing facility. Five co-employees of the gunman were killed and five Aurora police officers were injured when responding.

When wondering what degree of valor those officers were required to exhibit, imagine this: You receive a call that there is an active shooter in an enclosed factory setting. You don’t know how many shooters there are, the degree of firepower he possesses, and where he might lie in wait. Nonetheless, your job requires you, your duty compels you, to run toward the gunfire.

In the wake of Columbine and other mass shootings that have followed, many police departments have changed their response protocol. In those earlier tragedies, law enforcement was sometimes criticized for not doing enough quickly enough. The protocol previously was to become oriented to the interior of the structure and where the shooter might be before entering. That protocol has changed.

Now, police respond without hesitation, even if it means running into a preplanned ambush. By many accounts, that is exactly what the Aurora Police Department encountered on the day of this tragedy. They are called “first responders” for a reason. They make their safety secondary to the public. They serve. They protect. Few can perform this job. Even fewer choose to pursue this career today. The rest of us are so very lucky to have them.

We love Aurora and the way its citizens have responded to this tragedy. We love the men and women of law enforcement who on a regular basis face risks and dangers most of us can never conceive of. The Aurora Police Department is to be commended for their response to this tragedy.

I was very pleased with this firm! Highly recommended!!

Not a fan of lawyers (previous encounters with different firm); but, I was very pleased with this firm and with Casey Woodruff. Answered my questions and addressed my concerns in a timely manner. Highly recommended!!

Honest conversation, personable team and timely responses. Working with Mr. Evans and Cynthia has been a wonderful experience at a difficult time. Phone calls and emails are answered within a very reasonable time frame, each conversation is handled in a compassionate manner.

DJ did a fantastic job on my auto-accident claim!

I highly recommend Mr. Dexter Evans, and the Woodruff law firm. DJ did a fantastic job on my auto-accident claim. I really appreciated all the detailed information provided, and finding medical assistance for me. It was awesome. All my questions were addressed properly and asap. I made my final decision with confidence. Over all the […]

I’ve had to know a few attorneys in my life and Jon was the best.

Unfortunately, I got badly injured at an athletic job. Run by a company that didn’t care about me. I needed an attorney and Woodruff, Johnson and Evans was recommended to me by a family member. That small gesture ended up being the best legal advice I ever received. Jon Walker defended me and made sure […]

I wouldn’t have gotten the relief from my injury if Jay had not gotten involved.

I was referred to Woodruff, Johnson & Evans by a friend after a work related car accident. The workmen comp adjuster was giving me the run around. I was having terrible back pain but because it was work related my doctors could not provide me the treatment I need. Jay Johnson began investigating my case […]

Outstanding job for my mother and me.

Very professional. Was referred to me by my mother. Did an outstanding job for my mother and me. Great service!

Russ was the best!

Russ was the best! I got his number from my cousin. Best phone call I ever made! Always there for anything I needed and got all my bills paid and some compensation for me! Highly recommend.

Thank you for a good service!!

Steve Sandler presented himself professionally with good rapport and showed concern for my well being. I will definitely recommend him to others!! Thank you!!